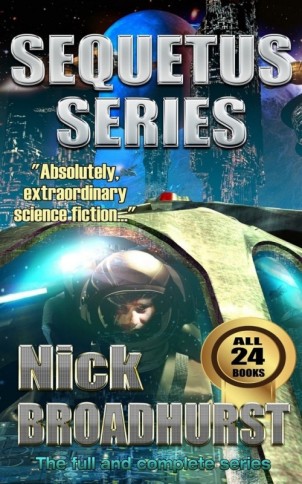 ………The Sequetus Series is big. It is about the subversion of a galaxy, this galaxy and all the civilizations in it.  The book starts off when an intelligence officer from out there is directed to go on a mission to Earth, known as Sequetus 3.  He is to investigate why there is such an anomaly with this one planet. For some reason the planet is way overdue its Intervention Day.  The planet governments insist that the visitors they get from out there absolutely do not exist.  Yet half the population believe that they are not alone, in the galaxy.

……….The planet also has a short lived population.  Instead of 325 years, people from Earth live only 75 years.  There is no explanation for that.   Also, the technology on the planet is advancing way faster than self-generated technological advancement.  This is suspicious.  The planet was once was said to be a prison planet.  Furthermore, its population has only been there a few thousand years, and the planet is ready to explode.  It is 1989 and the cold war is in full swing.  But why war?  Don’t nations solve their disputes, peacefully, unless someone outside has an interest in war?

……….Without giving all the plot away, our officer has to prepare an intelligence estimate on Earth and return.  Will the galaxy out there feel threatened by these short lived, and fast breeding races of Earth?  What will happen if this humanity gets off the planet?

……….The first few books are to build the reader’s universe.  They get you familiar with the characters.  Then in the fourth book, Magi, the plot kicks off, and you better hold your hat.  Here is where you get introduced to telepathy, telekinesis; and even if you do not believe it, it exists, and it is in this book.  To have faster than light speed travel, one needs to work out exactly how can a person and ship travel faster than light.  There is a way, and that is outlined in the story, but in the later books.  Plus, to do this, it is needed to look at what is the physical universe, and what is its true make up.  To be exact, the author reconstructs space and its so called vacuum, and what it really is, and the properties that space has.  It is not nothing.  Space isn’t just nothing.  The current models used by science just do not quite fit, so this is taken up in what is termed, Broadmatter Theory.

……….Next is time travel, and this is introduced to the reader in several stages.  The first is to be able to project oneself to an earlier or later time to when one is, so as to alter one’s mind in that other time.  This is déjàvu in this book.  Next is to take one’s body through time itself.  This also leads to an examination of how the universe works, and how this can work with time.  So, with all this nutted out, as well as how to access these otherwise very above normal human abilities, the background is set for our character to solve what ails not only Earth but every major civilization out there in this galaxy.  As to the story, it could have you weeping one moment and laughing the next.  Some of it is bloody, as space opera is just that.  The story spans over a thousand years.  The characters are very real, so let the author build up their worlds around you.  It is an excellent yarn with a brilliant plot.  This story has never been told.  It is absolutely unique.  So, enjoy it.

“READ IT, AND YOUR OWN UNIVERSE COULD CHANGE”

……….There are hundreds of illustrations and maps, a large glossary, with pages of references and notes in the back matter.  Below are the four miniseries books, that make up the Sequetus Series.  Click on them as you wish.

……….Expand the sample illustrations below, for a fuller viewing experience.  They are from the New Earth Miniseries.  The first line of illustrations is from the story, while the second line of smaller pictures is from the glossary, showing the background behind the story.

……….Maps are available in full size on this page: SEQUETUS-MAPS.