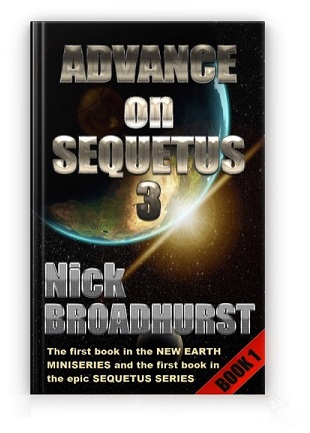 The First Book in the Sequetus Series.

An intelligence officer, from out there, is assigned to Sequetus 3, known as Earth.  It is 1989, during the Cold War.  His job is to get here, prepare an intelligence estimate, and return.  Planet Earth is an enigma.  It does not follow the traditional pattern of planets.  For a start, people lead short-lives but breed fast.  Governments deny extraterrestrials exist, and there is no plan for intervention by out there.  Agents from out there often vanish shortly after arriving.

This is the beginning of the New Earth Miniseries.  That intelligence officer has been commissioned by his Royal patron, to go to Earth, Sequetus 3, to find out what is happening.

There are too many contrary facts in the lifestyle of Earth inhabitants.  They have extremely short-lives, but they have a fast developing technology.  Earth governments have atomics, poised to destroy themselves.  There are drugs, poison in the food, and plenty of crime.  Small wars do not stop, and Earth’s pollution is unheard of out there.

The date is 1989, with the Cold War in full swing.  There are many signs that the planet has thousands of extraterrestrial visitors, but government authorities are in denial.

None of it makes any sense to an outsider.  And to get onto the planet, that is dangerous and almost impossible.

There are extraterrestrial bases all through the Earth system, including on its moon.  The planet is so isolated that there is no plan for intervention by out-there.  The far-away planet Maluka, that runs the sector where Earth is located, appears to be doing all it can to prevent others from finding out what is happening.

Out-there is not so easy to understand either.

The Galaxy is divided into sectors, and they are run by monarchs, often militarily.  There are sometimes rivalries between monarchs, but there is almost no war.  And the galactic economy is dominated by the Federation Warp Drive Bank, that has a monopoly on faster-than-light travel.

The intelligence officer’s patron, along with others, feels that what is happening on Earth may reflect what they see happening around them out there.  They are scared.  There are still plenty of good people out there, but they need answers.

This is a wild plot. It runs through all the books.  Like every great epic, it takes a little bit of writing to get the readers hot.  That is this book.

The book was first drafted in 1989 using pen and paper.  Since then all  24 books have been finished to complete this epic series.

There are pictures and illustrations to help you.  There are also maps, and a beefy glossary of terms.

Like the Galaxy, this story is big.  Soak it up, bath in it, and strap yourself in.  You are about to enter the real world of the Sequetus Series, the world where you actually live, where nothing is as it seems.

Please click on the images below to expand them. They are a sample of the pictures from this book.