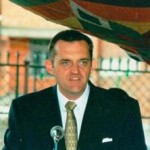 Nick Broadhurst is an Australian architect and Class A building contractor.

The very first stories were first hand written, in Australia, until he could afford an Amstrad computer with an above floppy drive.  In those early days each floppy disk could store about twenty pages of text data. No more.

Nick began working in Japan in 1992 and continued building the stories until self-publishing came about many years later, and the internet became his launching pad.

Nick wrote the Sequetus Series as a passion, starting in earnest while managing construction projects in Australia.   He wondered why there was war, hate, conflict, people being slaughtered, and did UFO’s exist?  And what about the dozen theories of our planetary history that seemed to be getting tromped on. He could see a pattern and so decided in 1989 to start writing a fictional account of what he had learned, and that was how it started, in 1989.

After the Sequetus Series, Nick wrote the Captain Kuro From Mars series of twelve children’s picture books.  That included comic strips too.  Mostly they were written in around 2016 – 18 while he was in Australia and Nepal.  In 2019 he began the rewrite of the first eight books of the Sequetus Series.  These rewrites will be published on a different website.

A lot of what Nick writes about he draws first-hand from life. He has never stopped wondering.

Nick recalls his first major life-adventure was to climb a string of mountains in Papua New Guinea in 1970.  That was before university, where he completed a Bachelor of Architecture.  Since then, he has worked in many countries, two of them in civil war.

While at university Nick worked in the Australian outback during the semester breaks. There he had time at night to read, and developed a taste for science fiction books. In all his travels, his fiction books always went with him.

The book reading got to a point where the best of the classics were all read.  The only thing Nick thought of left to do, was write.

He started with the story Advance on Sequetus 3, solidly setting the stage for what was to come.   The books built upon each other, to a spiritual science fiction zenith in the Earth Syndrome Miniseries.

Nick had great help from freinds of many nationalities. His ten years in Japan had particularly affected him and how he looked at life.  It was like he was awakened socially inside. The next great help was from his proofreader.

The subject matter of this series of books is big.   Nick hopes you enjoy your reading and has priced them to be read.  And lastly, good luck!  He confidently says, if you read the books from front to end, you will change.

Nick has another website called Himalayan Gold: Exotic Long Life Foods which is about prolonging the body’s lifespan.  This idea sprung up from the research in the Sequetus Series.  He wondered, how could a person live longer?

Nick has another website: Himalayan Gold: Exotic Long Life Foods which is about prolonging the body’s lifespan.  This idea sprung up from the research in the Sequetus Series.  He wondered, how could a person live longer?

And he also has a building inspection business in Canberra Australia.  Called My Canberra Building Inspections ACT.  This is how he makes his general livelihood.  His page is there and he also writes about his books and how inspections and writing have come together. Nick Broadhurst Building Inspector is here.

Should you be in Australia, and you need a brilliant photographer and cinematic productions, can you please try Monkeybrush Films. They can also be contacted here. They are adaptable and suitable for all genre and photographic needs such as book cover art, production settings and so on.

For fine artwork we recommends – again in Australia – Sam Broadhurst. He works on commission and  is available here at this site: Sam Broadhurst. Again, good for book covers, internal illustrations, props and generally internal visual development.