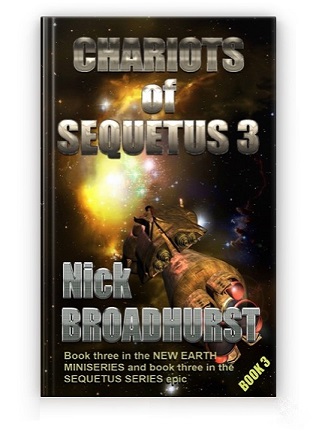 The third book in the Sequetus Series.

The officer sent to Sequetus 3, Earth, has escaped, and arrived back at his patron’s palace, systems away.  It is 1989.  He delivers his intelligence-estimate, on what he found, along with his recommended handling of the situation.  Immediately there is an assassination attempt on his life.  The threat of galactic civil war erupts, and an armada is sent by others to eliminate Earth.

This is also the third volume in the New Earth Miniseries.  There is more.

The extraterrestrial intelligence officer, who was sent to Earth, reports that Sequetus 3, as it is really known by out-there, is steeped in mystery.  It has elementary space travel, and crude computers.  It exports mind-altering drugs by the shipload.  And decades before, Earth began work on faster-than-light speed travel.  And this work on faster-than-light travel flies in the face of the Federation Warp Drive Bank, which owns the galactic monopoly rights to that secret technology.

Being 1989, Earth’s Cold War still has the planet on the brink of self-annihilation.  The most intriguing information found was of an Earth experiment to make a whole ship and crew disappear.  Upon delivering his report to his patron on planet Jilta, the known galaxy out there begins to change.

It turns out that an armada is probably being sent to Earth.  Its target is to completely eradicate all life from that planet’s surface.

However, the decision to destroy Earth by the ruler of a rogue sector, is not totally shared by all out-there.  This is where the book picks up the story.  It is nearing the end of 1989.

Should there be a rescue attempt to prevent the annihilation of Earth?  And at what cost?  Would that cost be worthwhile?

And what about the risk to those planets wanting to save Earth’s inhabitants?  The galaxy out-there is quickly polarizing into two groups.  Those wanting to save Earth are smaller in defenses and numbers.  Wouldn’t it be more prudent to do nothing, and let the planet suffer its own consequences?  There is good argument for that.

Is there something from that planet no one wanted found by others from out-there?  Plus, what were those explosions in space, in Earth’s outer solar system, that year?  They were reported in the news back then.  They were huge.  Power grids even went down.  Where were you in 1989?

There are plenty of illustrations, maps, and diagrams in this one; several dozen or so.  Plus there is the beefy glossary.  The book is fast and a good read.  Enjoy it.

Maps are available in full size on this page: SEQUETUS-MAPS.

Previous article
OVER SEQUETUS 3
Next article
TEMPLES AND THE JUGGERNAUT