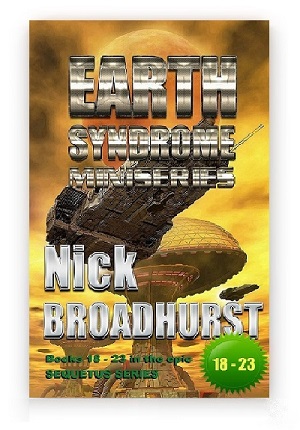 “THIS FOURTH MINISERIES IS AN AMAZING CONCLUSION.

“IT MAKES SO MUCH SENSE.  IT’S A DIFFERENT WORLD NOW.”

The events have swung full circle.  The Talkron, those subverting the Galaxy, are found still stationed near Earth.  But, it’s not known where they originate from, or which other galaxies may be involved.  This miniseries takes you there.  It covers the theory of time travel, faster than light travel, and more. Previously telepathy was covered, and is here in this miniseries, as is telekinesis.  You may not be the same after you read this book.

The universe out-there is not glossy.  None of the galactic civilizations are there to enlighten you to some amazing supernatural state.  Some are maybe neutral, but there are others, which have a destiny to enslave you. Learn which is which, and where they come from.

There are dozens of pictures and photos, as in earlier volumes, plus there are maps and sketches to also help you.  Plus there is an awesome glossary, so you can fully understand all the new terms.  There is a large notes section, giving more background behind the story.

Learn more about Earth, and what is in this system around us.  Read about the nearby galaxies, very close to us, and far away.   Learn about their influence on this galaxy, this system, this planet.

This book turns what you think might be – on its head. This universe is not as it seems, and this miniseries not only expands the box of science fiction thinking, but blurs its edges. There is a lot of factual data here, not just fiction.

“I IMPLORE EVERYONE TO READ THIS AMAZING SERIES.”

So, there is a reference and beefy notes section as well. It gives you some of the factual data from which this miniseries draws upon. There are also many illustrations, more than the earlier miniseries. Good luck!

Expand the sample illustrations below, for a fuller viewing experience.
.