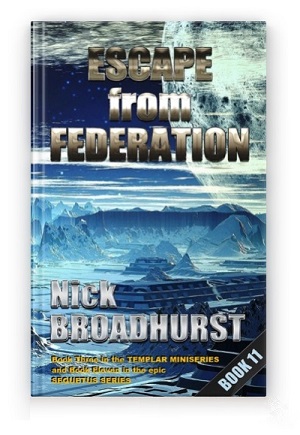 Here is the eleventh book in the Sequetus Series.

The galactic junta, which was ruling the Federation, and interfering with Earth until the Twenty-first Century, is back in full military expansion.  Its target is the expanding Temple movement, which sprang from Earth a thousand years ago.  The goal is to rid the Federation of the Earth short-lifers, and capture the one foretold to save them.

This is the third volume in the Templar Miniseries.  It is an exciting book.  It moves fast, and the plot follows naturally and effortlessly from the previous volumes.  This is straight and pure mind bending science fiction space opera, at its best, but with an incredible and believable spiritual thread woven into it.

Learn more about planet Palbo, and Brandon Mirak, and his militarist galactic expansion.  Learn of the hideous group behind him, aiming for full galactic domination.

In this book our heroine is captured.  She is removed from where she was caught, to Planet Sleebo.  Yes, there are enemy bases there.  But Jaron, and the Boguard, are being sent there on a mission.  Letone is there too, pushing the last of his days to do more good.  His body nearing a thousand years old.  But the enemy has been waiting for him.

But this is Sleebo, the home of Anki Storm.  And while she may have died on Sequetus 3, a millennium ago, she is not forgotten and neither is the honor of what she stood for.

When Jaron meets Amy, a wrecked prisoner of Jaron’s enemy, he wonders who is this woman, and why she crossed his path.  Jaron knows the prophecy.  Nothing is purely chance.  From this chance meeting and rescue, the Galaxy turns away from a path to disaster, to a new course into the unknown. Read the remaining books to find out just where it might be leading.

Like the other volumes, there are great illustrations, pictures, maps, and glossary.

Have fun and remember it is not all fiction.  There is a tapestry of truth below the stories. This book is a great read for all science fiction fans.