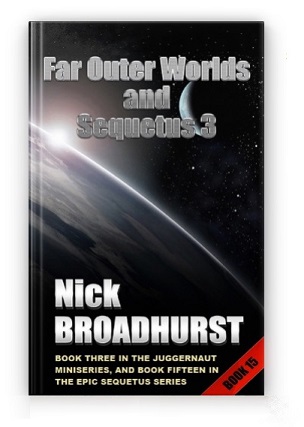 Here’s the fifteenth book in the Sequetus Series.  The head of the Palboan Temple, the largest temple next to Jilta, is being pursued across the Galaxy to the far Outer Worlds.  Here Jaron meets others, decedents from Earth pioneers, who have very different understandings of Earth events of back then, a thousand years ago.

Now, not only is the Temple being pursued, so are these new groups.

This volume is also the third in the Juggernaut Miniseries.

The story opens with Jaron, in the back of a canoe, being paddled upstream.  He has little memory. The person paddling claims to have a hereditary line back to Yoo-Rup of Earth.  That man’s name is Bolton Beel.  He explains to Jaron that the people dying above in the stars and clouds are defenders of Jaron, who actually is Lorde Jaron.  But Jaron cannot not remember why.  He could not think why he could be that important.

Above them a cruiser explodes in space.  Thousands more die in those few minutes.

It is confusing as Amy of Rambus appears on a river bank to save Lorde Jaron from the strange Scotsman Boltan Beel.

But Jaron has it in his mind, that perhaps all the fighting and dying might end, if he was to die instead.

This book is a little bit crazy.

But now they must get off the planet they are marooned on.

And if that is not enough.  There is an indigenous race on the planet that hails them as gods, and those locals have different names for all of them from their legends.  But how can that be?

So, in the middle you have the strange Scotsman, with his strange and hard to understand accent, Amy from Rambus with a reputation from hell, a Lorde Jaron who cannot remember his name, but who is the key to total Galactic prophecy.

There is an allied enemy out there, along with allied defenders, jockeying for a chance to kill them all or kill each other.

And what makes it worse is that the alliances are changing.

By the end of this book, you may be relieved.

This is wild science fiction thinking and maybe you expect it.  True, it is straight space opera.  True, it is fast, but this book skirts the edge of scientific thinking mixed with spiritual conjecture.  The edges between them blurs in this one.

The story can be gruesome in places, but it is non-stop. It is thought-provoking, and if the preposition behind this story is right, it might one day come true.  So be warned, put your seat belts on, because as you read this you are being catapulted into the very next story of this very wild Sequetus Series.

This book is great for any age, male and female, science fiction readers .

Below are a sample pictures found in the book. Expand them to see more.

Previous article
ESCAPE FROM FEDERATION
Next article
THE BOOK OF WAR