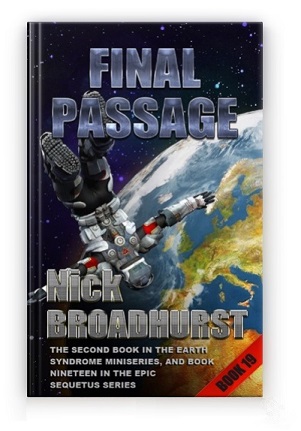 The battle lines are drawn.  Amy of Rambus, Jaron – originally from Earth, and others have united to flush out and eradicate the Talkron.  However, it is not that simple when both sides can now control time, use telepathy and telekinesis as weapons of war.  Plus, it is suspected that the Talkron may not be originally from this galaxy.

This volume is also the second in the Earth Syndrome Miniseries.  As further detail, Jaron is back in the Sequetus System.  He and others are searching for the Golden Cap, which gave Goren Torren wild abilities, and they have found it.

They are also discovering further secrets of Sequetus and are working out a solution to undo the effects of the Talkron, who have been running Sequetus for the past thousands of years.  Do not be surprised at what you find.  It is good science fiction space opera, with a spiritual twist.

Telepathy is in full swing, and it is as normal as having your morning cupper, coffee, or kalo.

The book begins on Mars, with a crew-briefing about Sequetus.  Some of the anomalies – moon structures – that exist there now, are looked at in more detail.  Then they discuss some of the other anomalies on the other planets.  They are all Talkron related.

Then find out what really killed Earth, though the Earth is not completely dead.  There are still parts not totally baron that life had not deserted.

As well, there is teleportation and time travel, all within theoretical believable bounds of science fiction.  But these are described in a way, you do wonder… hmm….  Maybe….

What is time?  If you truly knew what it was, then you could not only look at future events, with ease, and the past, but you could also influence those same events, future and past – with thought.

But could you also travel through the confines of time?  The answer is, most likely.  But we need to understand more about the physical universe construct, and that is what this book is partly about.

This is a pivotal book in this whole science fiction epic.

Like the other volumes, there are illustrations, pictures, maps, and glossary. Remember it is not all fiction.  There is a tapestry of truth supporting the stories.

This book is a great read.