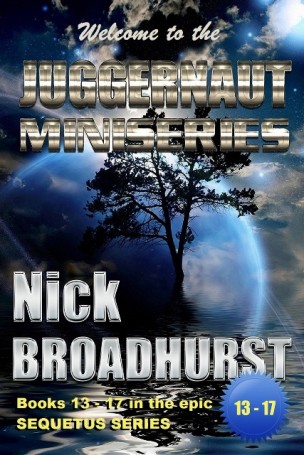 The Juggernaut Miniseries is the third miniseries in the epic Sequetus Series.  By now the true enemy of all galactic civilisations has been exposed.  There is a group out there, found to have been manipulating the civilized planets, including Earth, for thousands of years.  They have a name, and that name is Talkron.  They use secrecy and cabal to create war between potential opponents.  To rule, they want all weakened.  So one planetary system pitted against another, is how they work. They profit by war.

The galaxy is a tinder box of short-lifers, originally from Earth, and the established older-lived humanity who reside through much of the galaxy.  These two groups are being pushed to fight each other.  However, there are other forces in the galaxy, whose purpose is to push civilisations down a better peaceful path.  That group of forces is uniting against what has become an otherwise hopeless decaying and depraved lot of civilizations.