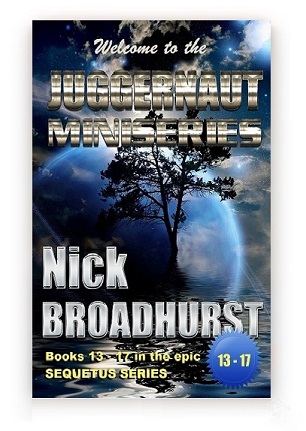 The Juggernaut Miniseries is the third miniseries in the epic Sequetus Series.  By now the true enemy of all galactic civilizations is exposed.  There is a race that has been manipulating all planets, including Earth, for thousands of years.  They have a name, and that name is Talkron.  They use secrecy and cabal to create war between potential opponents.  To rule, they want all weakened.  So one planetary system pitted against another, is how they work.  They profit by war.

The galaxy is a tinder box of short-lifers, originally from Earth, and the established older-lived original humanity, who reside through much of the Galaxy now.  These two groups are being pushed to fight each other.  However, there is other force in the galaxy, whose purpose is to massage civilizations down a better peaceful path.  That group is uniting against what has become an otherwise hopeless decaying and depraved lot of civilizations.

The Talkron race have been on an agenda, thousands of years old now.  They are winning again.  It was they who destroyed Earth.  However, with the little known races from the Pleiades, the renewed Temple movement, and Jaron, these groups are uniting into a Juggernaut of change.

Jaron is now part of the Boguard.

So is Amy, his close fighting companion.

In this third set of books, Jaron is kidnapped, but the attempt is foiled, but he goes missing.  Half the Galaxy is now after him, to save him, kill him, or use him.  Most know who he is, or was, many lifetimes ago.

Here the philosophy of time travel is found, to change events not to one’s liking.  This technology belongs to the enemy more than the Boguard or the Temple.  Characters in these books have telepathy, as a normal sense.  Some have telekinesis.  The way these abilities are developed, like time travel, are explained, and maybe are truly possible.

Expand the sample illustrations below, for a fuller viewing experience.
.
Maps are available in full size on this page: Sequetus Maps.
.
Previous article
TEMPLAR MINISERIES
Next article
EARTH SYNDROME MINISERIES