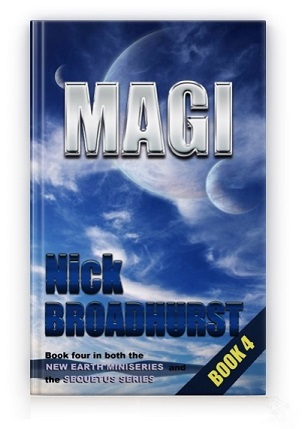 Magi – The Planet of the Gods

Here’s the fourth book in the Sequetus Series.

The main character, an agent from out-there, is back on Sequetus 3, Earth, in the early 1990’s.  His earlier intelligence estimate was incomplete.  Earth was nearly destroyed.  Now, he has to find who’s really interfering with this planet, and why Earth is so important.  He now finds a secret star system, steeped into Earth’s history, and himself central to a very old prophecy.

This volume is also the fourth of the New Earth Miniseries.  Here is more information.

Our extraterrestrial intelligence officer and his select group are now setting up a full operation on Earth.  The Federation has changed, and our main character is becoming extraordinarily influential, both out-there and on Earth.  It is still the early 1990’s.  However, Earth still remains an enigma, and as much as this officer tries to unravel Earth’s mysteries, new riddles crop up.

So, to find who really is running Earth he begins building a vast economic empire, in an effort to flush out those controlling planetary events.  His empire is based on him slowly ceding Federation technology to Earth’s corporations. It is very profitable.  It spans the continents and is venturing into space.  Yet, while he makes heavy profits, it is not yet exposing what or who he is searching for.

Then, with inspiration, our character and his group locate a planetary constellation often mentioned in Earth’s ancient history.  The constellation has also been off limits to the Federation out-there.

The off-limits system to the Federation is called the Pleiades, and becomes his new destination.

To find what belies the Pleiades constellation, and why it is in almost every one of Earth’s cultures, and folklore, yet forbidden to civilizations out-there, read on.

Upon venturing to that Pleiades system, our troop finds out its true purpose, and who could be interfering with Earth for their own benefit.  They also find another race who has been trying to help Earth, that those on the Pleiades do not know about it.  And then the troop begin to finally understand the true forces behind the division of power in the galaxy.

The more layers of the mystery you peel away, the more that become exposed to peel.

And this volume is extraordinarily spiritual.  A new dimension is being added here.

So, finally, our main character also finds out what others believe his true destiny is.

We hope you, the reader, have spiritual patience.  There is more to what one sees in this world than eyes will confess to.  This book is subtitled the Planet of the Gods.  Enjoy it.

This book is a great read for all science fiction fans.

Maps are available in full size on this page: SEQUETUS-MAPS.