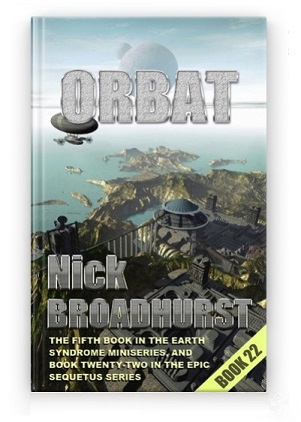 Here’s the twenty-second book in the Sequetus Series.  The central Federation civilizations are readying to invade Maluka, home of the Transgalactic Ship Corporation.  They meet on planet Orbat.  There is also a new phenomenon discovered on Earth.  There are growing dead-zones, where life ceases to exist.  Earth’s Amazon is one of several last zones for life.

This is also the fifth volume in the Earth Syndrome Miniseries.  You are very close to the end of this whole epic now, and the mystery will deepen before it is finally exposed.  Learn about the past dark secrets of Earth, who is behind the Talkron, and why.

As more detail, the central figure, Jaron, finds himself having to bring the two races of the twin planets, Orbat and Yaltipia, together to confront their common enemy, the Talkron.  The two races find they have a long common past with this enemy.

Follow Jaron as he tries to solve why life on Earth, and other central planets, is simply leaving.  What is making these planets barren, and what is causing these death-zones?

You will also discover the leadership hierarchy of the Boguard and how it works.

So it is back to Orbat, of the Pleiades.  The Prophecy is still unfolding.  More is now being found out of Earth’s past in relationship to the Pleiades.

And there are more answers in the Amazon, the life-force of the jungle just could be returning.

Expand the sample illustrations below for a fuller experience.
.
Maps are available in full size on this page: Sequetus Maps.
.
Previous article
NOTES: Earth Syndrome Miniseries
Next article
GALAXY