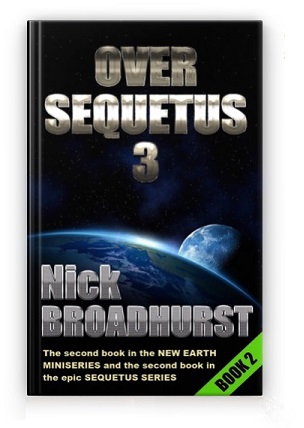 Over Sequetus 3 – Arrival on Earth

This is the second book in the Sequetus Series.  The intelligence officer from out-there, assigned to investigate Earth, arrived with his team in 1989.  To gather information fast he needs contact with who is really running Earth.  He already knows it is not Earth’s governments.  Seeing that the planet runs on economic lines, he chooses money-making to attract interest.  He really doesn’t have approval for any of this and so others, from somewhere, decide he has to be stopped, killed.

This volume is also the second in the New Earth Miniseries.  An extraterrestrial intelligence officer is on Earth, or Sequetus 3 as it is called out-there.  He was commissioned by Lorde Hymondy III, his patron from planet Jilta.  It is during the peak of Earth’s Cold War.  That officer has to prepare an intelligence-estimate, and give his findings and solutions back to his patron. They need to know what is really going on here.

He finds the solar system extremely busy with traffic to and from Earth.  Plus, he finds the world governments in denial of out-there, while simple evidence shows otherwise.  Earth is also registered with a no-go status by out-there.  And, the planet is not anywhere near being recommended for intragalactic intervention.

Follow our character in this next book of the Sequetus Series.  His methods to find out what is happening on this outpost type planet are unorthodox. He lacks polish.  He is almost arrested locally.  He is  shot at, and kidnapped.

It doesn’t seem to make sense though, as it appears the governments of Earth really do have an idea of what is happening around them.

Our main character, the officer from out-there, accompanied, finds more than he expected.  Someone has been ceding Earth alien technology.  Earth has quietly been developing its own faster-than-light travel technology.  But Earth’s governments are doing this unwittingly.  All of Earth seems setup by thousands of agents, over hundreds of years, manipulating the planet into wars, thereby speeding up materialist advances.

The worst is that people on Earth live extraordinarily short lives, as though they were engineered that way, with a runaway population growth.  And that is not just per chance.

Our officer from out-there, soon finds his efforts to attract attention worked, but not the way he wanted.  The response was too fast. Earth intelligence organizations are now working against him, as well as those from out-there.

This book has illustrations, a beefy glossary, and more.  Enjoy it, as you are now getting the feel of the Sequetus Series.  As a side note, this volume was originally penned in 1989, at the height of the Cold War.  It has taken from then until now to complete all 24 volumes.  This is a classic epic.

The pictures below are a sample from this book.  Expand them for a fuller experience.