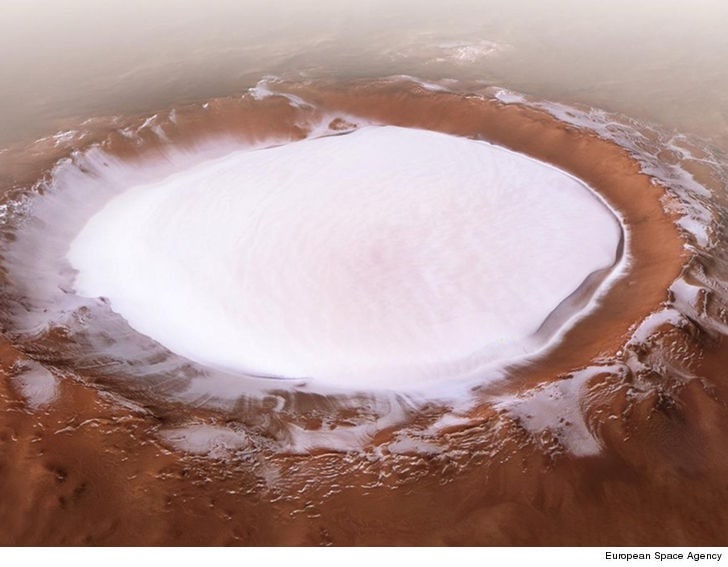 The question of life-on-mars is not really a question.  There is life on Mars. There is water, and the above photo of Korolev Crater shows ice 1.8 km thick.  Ice is water. And water is the building block for life.

At ISS – the International Space Station, there are small living particles living and clinging to the station, and they should not be there.  But they are. Vladimor Solovyer, the official in charge of the Russian segment of the station has stated that there are tiny plankton and microscopic organisms on the space craft’s exterior.

A study in January 2013 found microbial life up to ten miles above the planet, and a tiny invertebrate, the tardigrade, has survived the vacuum of space for ten days, experiencing radiation a hundred times what would kill a human.

As for Mars, it is mostly carbon dioxide. However, very early tests from the 1970’s showed that traces of both methane and formaldehyde were in the Martian air.  To exist, it must have been made recently and the only way is via living organisms.

There are multicellular animals on Earth that live without oxygen. In 2010 small animals were found in salt brine that no oxygen could get to.  “The creature’s cells apparently lack mitochondria, the organelles that use oxygen to power a cell.  Instead they are rich in what seem to be hydrogenosomes, organelles that can do a similar job in anaerobic (or oxygen free) environments.  The find could help scientists understand what life might have looked like in the earth’s early oceans, which also had very little oxygen.”

As the Curiosity Rover is making its way through Gale Crater on Mars, towards the central Mount Sharp, it is passing over damp looking soil, and now has NASA scientists claiming that Mars in cold and damp.   The same scientists also say that if life was there it could live off the minerals now being found in the Gale Crater.

Of course none of this implies that there is sophisticated life of Mars, such as animals or fish, but once life gets a hold, it seems to work out how to survive in the harshest environments we can throw at it.

This row of anomalies may not exactly be life, but there are three photos of some kind of UFO in the Martian sky.  There is a photo showing the rover almost got bogged in moist soil.  Two photos show water washed dust off the rocks.  Photo 7 shows the rocks are very clean with the fines washed off the rocks, recently. Photo 6 shows what could be frozen water, as the silt between the clean rocks is suspended in a translucent type of solid mud.  To the top right of that picture is where that mud crust has been broken by the rover wheel. It shows moist soil.  Next there is a mountain that reminisces as a fortress.   And last we have what appears as a pipe with a valve at the end.  Mars should not have underground pipes with valves, but there we are.