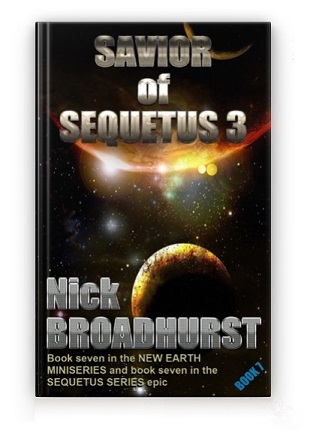 This is the seventh book in the Sequetus Series.

Here, the main character from out-there, now on Earth, is still trying to save it.  It is 1997, and he has located the source of an extraterrestrial grey race.  They have been Earth’s source of wars, and worse, for thousands of years.  It seems unrelated, but the Federation out there is also vanishing.  Are they the source of the agents that have been corrupting this planet, and perhaps out-there as well?

This is also the seventh volume in the New Earth Miniseries.  It launches out, in yet another direction searching for the why of Earth.

The story starts with our extraterrestrial officer now on the other side of a time portal he found in Mexico, called the Zone.  He’s now acting on discoveries found of eighty-six thousand years into the future.

Yes, it sounds absurd.  But our character, Goren Torren, has new-found abilities.  Telepathy is part of it; telekinesis is too.  So is wisdom.  And sure, he is always with members of the elite Boguard when he travels.  However, none of them are any match for what they find on the other side of the portal.  To save Earth, he has to….

It is not just that he is in a future.  He discovers where Earth went wrong; he finds what is really wrong with the planet, but can he do anything about it?  And how can he use this knowledge to address the present, of 1997?

Even with this new information, is someone playing with his mind? Is some force trying to get him to do what they need to be done, to bring about the future they want? How does he know that what is in his mind is really what he wants?

Has he really found the source of Earth’s problems, or is he merely being given thoughts that allow him to believe he has found his true goal? Yes, he found thought can be transmitted.

It is like someone somewhere has control over his mind, and he can sense it, but it is just beyond his perimeter of awareness.  And are these thoughts pushing him into ideas that he wants, or is it what they want?  Which are his thoughts and how can he tell?

Like the other volumes, there are great illustrations, pictures, maps, and glossary.  Have fun and remember it is not all fiction.  There is a tapestry of truth below the stories.  This book is a great read for both male and female science fiction fans.

Here is a sample of the illustrations in this book. Expand them for a fuller experience.