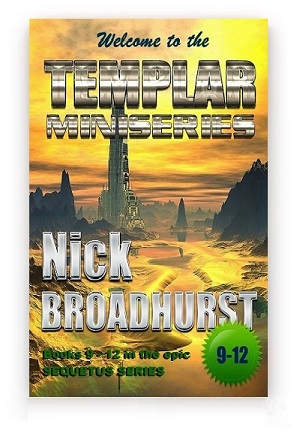 Templar Miniseries – And The New Worlds

Here is the second miniseries in this exceptional science fiction epic, the Sequetus Series.  The first miniseries, the New Earth Miniseries, details how Goren Torren, an agent sent to Earth, was to prepare an intelligence estimate on the affairs of the planet, back in 1989.  He was confronted by a planet about to incinerate itself in global atomic warfare, a population of exceptionally short-lived people, and an escalating technology that was advancing so rapidly, none of it made any sense.

The worst was that while there were many extraterrestrial visits, mostly sanctioned by out-there, they were denied by the local Earth governments.  To boot, there were illegal exports coming off from the planet too.

This is when Goren Torren entered the scene.  The planet is run by people unknown, who operate higher than the governments representing the people of Earth.  To find out what was going on, Goren had to get known, and that he did.  He began a business empire, and it flourished.

He introduced a spiritual philosophic teaching, after being introduced to one from out-there.  It eased Earth tensions.

All these actions seemed to catch the eye of someone.  Goren and his followers were attacked both in the corporate and media sense, until he was assassinated outright.

The story did not stop there however.  While his death then thwarted a plan to incinerate the planet in total war, those seeking his destruction also wanted him, the life-force, the spiritual essence, that was him.  They wanted him captured.

His killing on Earth was premature and not properly planned for.  Now that enemy has been depopulating Earth, for a thousand years, searching for this one reborn person.

In the meantime, some millions from Earth left.  They went to the stars, and took his spiritual philosophic teachings with them, under the name of the Temple.

The Temple have a doctrine that one lives again and again, and that life is just a cycle of birth and rebirth.  In fact, many civilizations out-there have this.

Expand the sample illustrations below, for a fuller viewing experience.
.
Maps are available in full size on this page: Sequetus Maps.
.
Previous article
THE SEQUETUS SERIES
Next article
JUGGERNAUT MINISERIES