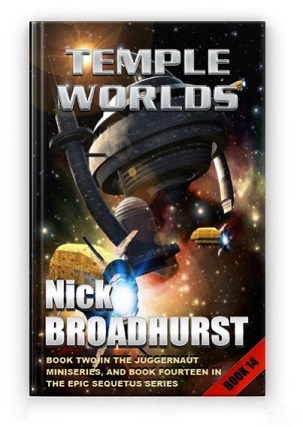 Here’s the fourteenth book in the Sequetus Series.

Within the Federation, something strange is happening.

That same strangeness had been affecting Earth for thousands of years.  Now, the Boguard, a benevolent galactic force, have been trying to herd all civilizations into an ethical direction.  However, they found something scary about the Federation Warp Drive Bank, which holds the monopoly on faster-than-light speed travel.

This is also the second volume in the Juggernaut Miniseries.  In more detail, the plot is now set back on Jilta.  Here you will learn more of that planet, the Imperial Federation Warp Drive Bank, its operations, and technically how faster-than-light speed travel occurs within the Federation.

Read the first book in the miniseries before you come to this one.  This book is full of action, as usual.  It is fun and enlightening.  Again it is pure space opera.  The plot should have you glued.

The book starts with Jaron being whisked away, from assassination, by his personal secret service called the Corduke Network.  It is reported that his interceptor exploded in space, and he is dead.  His son, Tubin, upon hearing the news is mortified.

Tubin’s half brother, Omm, is impatient, and wants the spiritual empire his father built as his own.

The Temple in the Palboan planetary sector was going to be Omm’s, as promised.

Now Tubin is feeling strange, as though he could not trust his brother.  He wondered….

Omm was carefully explaining that he would now conduct an investigation into what really happened, and remove the Cordukes, down to every last one of them, and take revenge for what happened.

You will learn the true secret behind the Warp Drive Bank.  But who can change this?  It has been going on for millennia.

There are illustrations, maps, and a great glossary, to get you to the end of the journey.  This book is truly one of the best, and its themes are carried through to the very end of the series.  Good luck.

This read is good for both male and female science fiction readers, and there is no adult content.