TEMPLES AND THE JUGGERNAUT 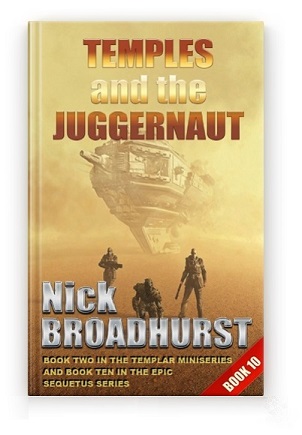 Temples and The Juggernaut – Evil’s Surface

Here’s the tenth book in the Sequetus Series.

For a thousand years the Temple religious movement, which began on Earth after the turn of the Twenty-first Century, expanded to the stars.

There is hatred of those humans from Earth.  Races from out-there live long-lives, hundreds of years.  Those who migrated from Earth live short-lives.  Both are scared.  There are plans to end the plague of Earth short-lifers and their Temple movement.  There are plans to resist.  Will the Galaxy erupt in violence?  Some hope so and are even planning for it.

This is the second volume in the Templar Miniseries.  In more detail:  The story is set on the Outer-World of Rambus.  It is hotting up for the Temple, as forces move against them.  The Federation seems to be dividing, between the newly arrived short-lifers from Earth, and the established long-lifers.  It is fast and wild.  And hold your stomachs as you might squirm through the pages of this exciting book.

There is a group out there trying to eradicate this new Earth race of humans that has exploded into the Galaxy.  There are new groups, jockeying for good, and others, lining up to push the Galaxy to where their own purpose lies.

But in the quest to get rid of these short-lifers from Earth, and their new religion, they make a bad mistake.

MORE STORY DETAILS
.
Unknowingly they make an enemy that will be their eventual undoing.  This woman seems young, and someone easily matched.  But they made a bad mistake.  Find out how and why.
.
Read the future books to find out just how wrong they were in estimating this woman’s threat to them.
.
You will also learn more about Brandon Mirak, the puppet leader of the planet Palbo.  Find out who is behind him and who is manipulating him.
.
You will learn more of the pirates of the Galaxy and who supports them.
.
You will learn what they do to human beings when they find them and what they turn those humans into.
.
But remember, the Boguard are still there, and there is the prophecy they still intend to fulfill.
.
Like the other volumes, there are great illustrations, pictures, maps, and glossary. Have fun and remember it is not all fiction.  There is a tapestry of truth below the stories.
.
This book is a great read for both male and female science fiction fans.  The author really enjoyed writing this one.
.

View this sample of illustrations for a fuller experience.