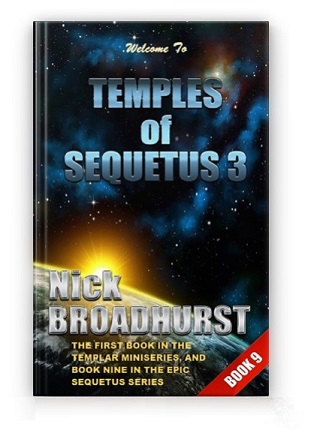 Temples of Sequetus 3 – A Force Reborn

Here’s the ninth Sequetus Series book.  It’s been a thousand years since the assassination of Goren Torren, the officer sent to find what was really happening on Earth.  He was killed before he could solve who was destroying the Federation.  Now Earth, known as Sequetus 3, is being depopulated.  The life-force , which was Goren Torren, is still on Earth, but hunted, and about to make an escape in a new body, a new lifetime, as a different person.

This is also the first volume of the Templar Miniseries.

This is a wild book.  Half the world’s populations believe in this concept of living life after life, in different bodies.  Life as a life-force continues, and cannot be killed forever.  It does not vanish with body-death.  Out-there also know this.  That is why they still search for who was Goren Torren.  They must catch him, imprison him, or else they risk the prophecy of Goren Torren becoming an absolute truth.

The religion that Goren Torren began a thousand years ago has started to take hold on other planets out there. The long-lifers do not like it, that a planet of short-lifers should have produced such a catch-worthy spiritual philosophy.  And that the short-lifers are breeding so fast worries many of the long-lifers.

And while the person that is Goren Torren, has not restored all his own memories back from then, he has some of the ideas, and he still knows what he knows.

Also waiting for the new life, that was Goren, is his old Boguard mentor, Letone.  Once they meet they both know that they must get off planet Earth.  Letone knows it more than anyone else.  But will they succeed?

Letone knows the prophecy, and and the part he has to play.  Letone is at the end of his thousand year lifespan.  He knows he must do everything he can to bring the final episodes of the prophecy about.  The Boguard have been working on this for a lot longer than Goren Torren was alive.

Also out there are the Outer Worlds.  These worlds are too far away for the ordinary long-lifer to go to and inhabit.  But short-lifers love the wildness, and the chance of a new life, and t o be left alone. They are just happy to be free of their old world, Earth, and its old ways.  Often short-lifers relish the idea of starting new beginnings out there where no one else exists.  And it gives them a chance to practice their religious faith as taught by Goren Torren, without persecution.

And on one of these worlds, Rambus, is a young girl, named Amy.  While she is many light-years away from Earth, she is part of the prophecy, and others know it and are hunting for her too.

Like the other volumes, there are great illustrations, pictures, maps, and glossary. Have fun and remember it is not all fiction.  There is a tapestry of truth below the stories.

This book is a great read for both male and female science fiction fans.

View the sample illustrations below full size, for a fuller experience.