THE BOOK OF WAR 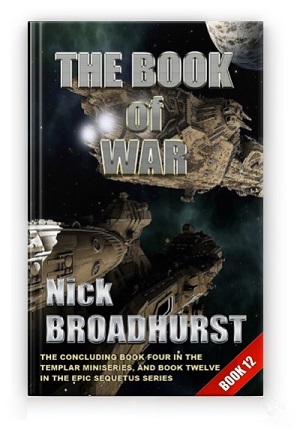 The Book of War – The Price

Here’s the twelfth Sequetus Series book.  The military junta that was interfering with Earth, prior to the Twenty-first Century, is now trying to arm the Temple religious movement.

The Temple religion started arriving out-there with the short-lived Earth refugees, over a thousand years ago.

The junta’s purpose is to put the rest of the long-lived Federation in fear, to make them strike back.  They have been waging a massive false propaganda campaign against the Temple.  So, finally, it is now war, but a step in the prophecy fulfillment.

There is one who seems to be in the center of attacking the Federation.  He is evil.  Planet Jilta, now the home of the Temple, is really unprepared.  But it will fight if necessary.

While a war from Palbo is now launched at planet Jilta, the head planet of the Temple, there is another who has his own agenda.  And his target is right at the center of the galactic Junta.

And, additional to that, is yet another person, by his side, named Amy.  Amy has her future.  She is prophesized. Amy is a wild card that the junta never prepared for.  But they created her.  They absolutely did. They caused her presence, and so now they will be the affect of her.  She has a purpose, and knows who her enemies really are.

This is the fourth and last volume in the Templar Miniseries.  You will have to read the other books before reading this one.  So we will not tell you more.  But if you have bought this book first, keep it and get the earlier three books in the miniseries.  You will love them all.

Like the other volumes, there are great illustrations, pictures, maps, and glossary.  Have fun and remember it is not all fiction.  There is a tapestry of truth laying the foundations of these stories.

This book is a great read for science fiction fans.