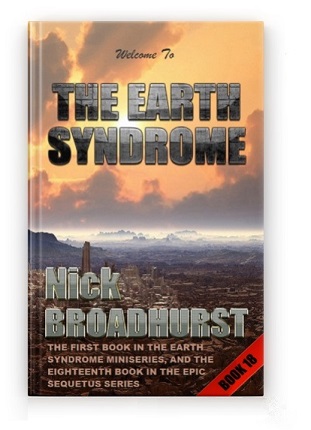 Here’s the eighteenth book in the Sequetus Series.  The secret organization bringing about the downfall of all known galactic civilizations has been found.  Its nerve center has been traced back to Sequetus, Earth’s solar system.

There is a secret race known as the Talkron.  The year is now 3057 AD, on Earth, and the Talkron control the entire system.  However, Amy of Rambus, and the others are coming.  And they do not intend to be invited.

Jaron, now Lorde Jaron, is heading back to Sequetus 3, Earth.  They need to find why Goren Torren was originally sent to Earth in 1989.  Now, a thousand years later, they really need to know.  What has been plaguing Earth, and the Galaxy, for these millennia.  If you have come this far, you mustn’t leave the series now.  You have to find out.

Have you ever wondered what artificial intelligence is?  Well, it is not artificial at all.  There is no such thing.  It is real.  Read this book and learn how and why a ship, or any computer that is big enough, can and will be imbued by life.  Once you know the mechanism, you will understand how.  It can be good, or it can be bad.  In this book you are introduced to the good version.

The cover to this book shows remnants from the last civilization on Mars.

Also learn more on how to gather thought and transmit it.  They call this quiet-talk.  It has been happening since the book Magi, in the first Miniseries.  This is a natural phenomena of life.  These books have it – this natural occurrence..

Goren’s daughter is there, back in Sequetus with him.  Amy of Rambus, the Goddess of War, is there too.

They are planning to get to Earth, its moon, and particularly Planet Venus.  Venus has something they need.  But first, how can they get into Sequetus, relatively unobserved?  If the system is that controlled by the Talkron, how can they make it in without tipping who they are?

This is your last journey.  Buckle in, and suit up, for now you are entering into the eighteenth book of the Sequetus Series.  You are about to find out some heavy data.  You better be there.

The history of the Federation is mirrored in the history of planet Earth, from the the planet’s prehistoric times onward.  Learn as Commander Beel delves into the planet’s historic past.  Beel’s hope is that if he finds what was really happening on Earth, he can deal with what is happening in the galactic civilizations out-there now.

There are illustrations, pictures, maps, and a glossary.  Have fun.  Remember it is not all fiction.  There is still a tapestry of truth below the stories.

The pictures in the gallery are samples from this book. Enlarge them for a fuller experience.

Previous article
THE FEDERATION UNRAVELS
Next article
SAVIOR OF SEQUETUS 3