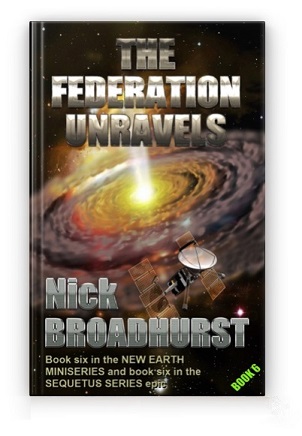 The Federation Unravels – The Black Junta

This is the sixth book of the Sequetus Series.  Our main character, an extraterrestrial intelligence officer, is now digging behind who is attacking him.  He finds there is a coalition between a small grey race of extraterrestrials, which no one from out-there knows anything about, and some Earth governments.  It is 1997.  Out there, the Federation is quickly falling apart, with their rulers vanishing.

This is also the sixth volume of the New Earth Miniseries.

On Earth, our extraterrestrials’ corporations are being attacked.  They are heavily targeted by sabotage, infiltration, and are falling apart.  The key character of these institutions has gone into some other dimension, what they call a time portal.

That portal exists on Earth, in Mexico.  Without him, his followers’ inability to fight back is bringing down his empire and credibility.

His followers and the reliable employees in his corporations do not have the foresight, or ability to sense future moments in time.  Unlike him, they cannot see what are right decisions before they happen.

And who are these attackers of his?  There are still thousands of agents out there, now organized, concerting the destruction of his corporations.

Who are these agents?  If they are not from Earth, and not from the Federation, then from where?

Question your existence around you if you dare; the real world is only what you believe.

Plus, it is not just Earth, or Sequetus 3, which this is happening to, but also the whole galactic Federation.  It also is under attack from out-there, but further out than ever before.  Who is this, and why does this have to affect Earth?  Time is crunching forward.

Like the other volumes, there are great illustrations, pictures, maps, and glossary.  Have fun and remember it is not all fiction.  There is always a tapestry of truth below the stories.

This book is a great read for all science fiction fans.

Here is a sample of illustrations in this book. Expand then for a fuller experience.