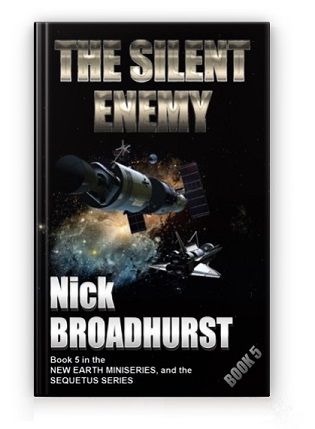 The Silent Enemy – Rulers of Earth

This is the fifth book of the Sequetus Series.

Our agent from out-there has now permanently set up on Earth.  He is going to find who is running this planet, by becoming wealthy, and by becoming very popular.  That is his plan. His funding is unlimited.  His theory is to get the extraterrestrial rulers behind Earth to find him.  They quickly do, and try to destroy him again and again.  However, he has many allies.

This is also the fifth volume in the New Earth Miniseries.  Below is more information.

This book turns down a totally new track, but is very believable.  To detail this further, our main character, our extraterrestrial intelligence officer, has developed new spiritual abilities having returned from the Pleiades to Earth.  He can do now what he could only once dream of doing.  However, the funny thing is, he says all people dream of being able to do these things, and all can do them already.  Mostly, he says, they just do not know it.

He has developed telepathic abilities, telekinesis and extraordinary wisdom.  He starts a personal following, to not only make his corporations big, but his name and self as well.  The media love him.  He is right out there now.  They do not know his background, or where he is from.  He is just fantastically successful and wise.

This does draw out the enemy he seeks, though.  Quickly, there are assassination plots to kill him.  Some almost succeed.  Where does he come from?  People are now asking.

The media also wants to know, what are his corporations doing, sprawling all over the planet, in a matter of a quick decade?  Why is he really so successful?

Does he need to be cut down?  A small percentage start to think so.

Are those who run this planet, losing control?

It is the late 1990’s, and time is moving on.  He has been working on finding this enemy for almost a decade now, and it is beginning to show.  He is not aging like the rest of Earth’s population.  His life span is longer. So he knows, in a strange way, time is running out.

As well, communication with out-there is blank.  The old Federation is no more.  Whole sections of the galaxy have blacked out, and when ships are sent into some regions, they vanish and never return.  What is happening?

Like the other volumes, there are great illustrations, pictures, maps, and glossary. Have fun and remember it is not all fiction.  There is a tapestry of truth below every great story.