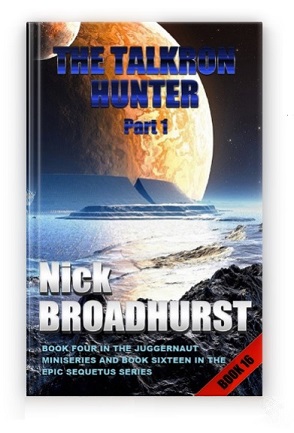 Here’s the sixteenth book in the Sequetus Series.  Those subverting the culture and civilizations of the galactic Federation, including Earth, for the past thousands of years, have been exposed.  They are the Talkron.  While they’re able to subvert time, they have made a real error.  They hurt Amy badly, and she has no mercy and is tirelessly evening the score.  She’s Amy of Rambus, or the Goddess of War, and she’s coming for them. How, read on….

This is also the fifth volume in the Juggernaut Miniseries.  In more detail, the Talkron have been found.  Never before has this happened.  They are the ones controlling Earth and all the other planets in the Federation, and they are exposed.

A small group, headed by one originally from Earth, has decided to take the fight back to the Talkron stronghold.

Sure, the Talkron have always been there, pervading every planet in the Galaxy, since time was first recorded.  They are the ones who have been behind the subversion of every great culture.  They are ultimately the ones behind every war, manipulating every oppressive action.

By using a form of mental implanting and controlling thoughts from afar, something that every great planet and nation ventured into before its downfall, they controlled all.  And that included the great cultures of the historical Earth.

But in this book, you see the total emergence of something never foreseen by the prophecies.  It is Amy of Rambus, who now has the label: Amy, the Goddess of War.

Amy knows who they are and is coming for them this time.  And she seeks revenge, justice, to balance and even the score.  She seeks to eradicate them all from the bowels of the physical universe, and send them back to hell or wherever they came from.

She seeks revenge and justice for her family they killed, her youth they perverted, her religion they stole. She seeks to destroy them to their core and then work out how to remove their remnants.  She seeks to expunge the very memory of them from all civilization.

She is coming, and they know she is. They were never prepared for this, for she is now the Talkron Hunter.

The Talkron have never known fear before.  They always were ready for any setback.  They are the masters of time.  Time is always on their side, but Amy is not anything they prepared for and nor could they predict her.  She is the Talkron Hunter.

What they find might surprise you; it might shock you, or you may just think it could never happen.  So why don’t you fasten your seat belt, buckle in, and get catapulted into the next book in this wild epic.

As usual, there are great illustrations, maps and diagrams to help the reader, plus there is a full glossary.  The book is good for both male and female science fiction readers.

Expand the sample illustrations below for a fuller viewing experience.