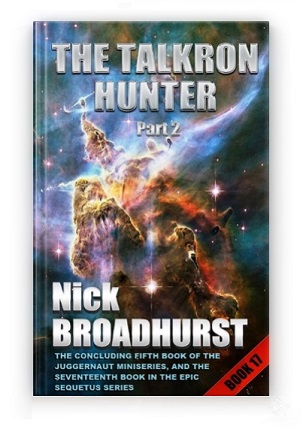 Here’s the seventeenth book of the Sequetus Series.  Amy, of Rambus, dubbed the Goddess of War, is coming.  Those grooming the galactic civilizations for takeover, hurt her beyond mental pain thresholds. She lives only to even the score.

The race which hurt her is the Talkron, an evil secret race that had infiltrated the galaxy, unknown until now.  Their home planet in the Federation has been exposed and Amy is coming.

Amy is the Talkron Hunter and the Talkron have never been exposed before.  Secrecy was always their core practice.

This volume is also the fifth and last in the Juggernaut Miniseries.  In further detail, the Talkron have been subverting these galactic civilizations, by controlling the media, the governments and more.

Now they have become the hunted.  This book is wild, but what do you expect from space opera in its purity?  Again, the edges between spiritual fantasy and science fiction are mixed.

But Earth is no longer a hollow distant memory.  It is realized that Sequetus too is likely a home-ground in the present for the Talkron.  So, Commander Beel is leading the first expedition to their religion’s homeland.

Yes, Beel takes a column to his historical Earth.  Amy goes with others to confront the Talkron on another planet.

There is the secretive Temple Guard and the closed-off Cordukes, all part warriors, part intelligence operatives of the Temple.  They work for Amy.  She works for the Grand Master Templar, or so it is believed.

But he knows Amy.  He gives her the rope she needs and he knows it is not a leash.  She has a destiny.  He has seen it, and she must complete it, or else her own spiritual future is in abeyance.  Her future is the Temple’s, and he totally trusts her.

And this is not all, time is definitely marching on.  Jaron has his children and now they are all coming of age.  They are part of the prophecy.  And it is as if they are driven by a purpose they had long before they were born.  And perhaps that is true.

We are not going to tell you how this ends.  So hold onto your seats.  All the characters of this miniseries are present.   If you liked it this far, you will be wanting this book without further explanation.

As usual there are some great illustrations, diagrams and maps.   The story-line is at the edge of reality.   There is no adult content, and the book is good for male and female science fiction readers alike.

Expand these sample illustrations for a fuller experience.