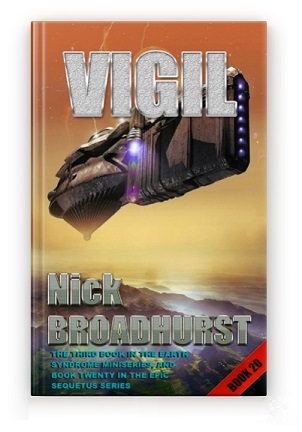 Here’s the twentieth book in the Sequetus Series.

The Talkron on Sequetus 2, Venus, are being routed.  The Federation of Planets is united in launching a counter offensive to the invasion of their galaxy.  But how, which galaxy and where do these invaders come from?

Black Knight has been found orbiting the Earth, but who belongs to it?  The answers to these secrets, and more, are to be found residing in ancient Earth libraries.

Here is also the third volume of the Earth Syndrome Miniseries.  As further detail, here on Earth, unusual things happen.  The Federation Alliance meets head-on, with the Talkron resistance of Sequetus 2 – Venus.

Jaron returns through the Mexican time portal known as the Zone, to confront an old nemesis – Centrecom, in search of foolproof time-travel.  The book is full-on, with action.  There is also a lot of emotion and feeling in this one.  The characters are very real.

That is why so many little grey aliens were seen on Earth, and nowhere else in the Galaxy.  But remember, Six-Worlds is eighty-six thousand years into the future, and these aliens have the same DNA as us, as once they were us.

But who is creating this insane time loop, for if these aliens are really from the larger Earth species, who originally created this loop?  And are they still doing it?

Some of Earth’s mysteries are being peeled away.  Likely, some of these, such as Black Knight, are unknown to most readers.  Yes, this object orbits Earth, on a polar orbit, and it is in the shape of a space ship, and has been doing so for a very long time.  Well, the truth is a tapestry upon which this story is written.

Like the other volumes, there are great illustrations, pictures, maps, and glossary. Have fun and remember it is not all fiction.  There is the tapestry-of-truth as a foundation to the stories.

This book is a great read for both male and female science fiction fans.